Navigating Toxic Culture and Its Effect on Teams 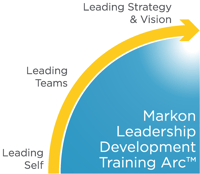 The first session of the day was led by Tom Waltrip, Pricing Lead at Markon, who gave the class a briefing on “Markon Project Financials and Pricing”. Without spoiling this phenomenal briefing for anyone who has not yet had the opportunity to experience it, Tom was able to introduce the class to Markon proprietary financial information while weaving in basic concepts of program financial management. We covered topics such as the importance of efficient accounts receivable practices, various contract types, and pricing strategies.

On the topic of contract types, the briefing led to an interesting discussion around the use of Firm Fixed Price (FFP) contracts in the management consulting industry and how this can be preferable in certain circumstances even though the majority of risk is with the contractor instead of the project owner.

Next in the morning session, Steve Genn led us through a “roleplay” exercise where we broke into small groups to discuss a case study and imagine how we would have handled a specific scenario if we were faced with a similar situation as the main character.

The case study focused on an international consulting firm’s office in Mumbai, India that regularly produced the best business numbers and was the brightest star in the company, but it also had a growing pattern of significantly higher turnover rates than the industry average. It turns out, the office was led by an extremely intelligent and highly credentialed individual, who was credited for the bulk of the office’s growth and success, but he was also known to be overbearing and “hot-headed”.

Employee surveys had shown that the office team members were unhappy, and employees had stated in exit interviews that the manager was “too difficult to work for”. Now it was time for the company’s regional manager to meet with the Mumbai office manager… With strict orders from corporate to not upset this “hot-headed star performer” what should the regional manager say during the meeting?

Take a minute to imagine… how would YOU manage this sensitive situation?

After the group exercise, we discussed how the balance of efforts between cultural engagement and performance metrics can affect teams in both the short and long term. Lastly, we went over the Services Performance Insight Model and how this could be applied internally to Markon, whether at the contract, portfolio, or corporate level.

Finally, before breaking for lunch Leigh Valudes introduced us to the Gossip Prime. This prime defines “gossip” in a unique way, essentially stating that gossip is when two people talk about a third person with no intention of bringing the third person into the conversation.

Expanding on that definition, the prime challenges us, asserting that it is up to the recipient of the gossip to shut it down. In other words, if someone comes to talk to us about another person, we (as the “recipient”) should confirm if the intent is to offer this feedback to the third person. If it’s not the intent, we should call it out as gossip and assert that we don’t want to hear it. Not only does this discourage the negative effects of gossip, but it promotes a healthy environment of feedback.

You can learn more about Gossip Prime in this video from Chris McGoff, author of The PRIMES and founder of The Clearing, and by visiting theprimes.com/gossip.

We had another inspiring interview during our afternoon session, this time with Markon’s Vice President of Operations, Krissy Goff. Krissy shared some stories from her childhood as an “Army brat” and about her journey from ROTC at North Carolina State to an Army career as a Logistician. She shared how her Army experiences prepared her for transitioning into a career in the civilian world as an HR professional, first with Walmart, then with Alion Science & Technology before coming to Markon.

One of the most memorable moments in the interview is when Krissy discussed her motivations for success. She described how motivation came easy while in the military with a hyper focus on mission and a strong determination to provide the best support possible to the warfighters. Upon entering civilian life, however, that focus on mission was no longer available as a driving factor. Instead, Krissy described a new motivation which has guided her throughout her entire career, finding her “True North”.

Mike, a project manager within the Facilities Solution, is an experienced architect and project manager with a focus on secure renovations within the Intelligence Community. In addition to a Bachelor of Architecture from Virginia Tech (Go Hokies!), Mike has over a decade of experience in the design and construction field. He has worked on projects of all scopes and sizes, both government and commercial. Currently, Mike supports Markon's National Market account, acting as an owner's rep for the client site.