September LDP Blog: It's Never Too Late to Learn

September marks the halfway point of the 2022-2023 Markon Leadership Development Program (LDP) session, and I find myself reflecting on the path that has led me to be a part of this fantastic opportunity. When we are young, many of us are brought up to believe that the proper sequence of events to adulthood is to graduate high school, go to college, get a degree, and start a career. Granted, that is a very basic interpretation, but generally I think most people would agree that this is the formula taught to kids growing up. For others though, that career path isn’t so clearly defined, and they end up taking a less “traditional” route. This is the group I happen to fall in.

I tried following the “expected” path and went to the University of Northern Colorado (the lesser-known UNC) right out of high school with the idea of pursuing a degree in music performance. Unfortunately, my grades coming out of high school forced me to start college on academic probation, which meant I could not participate in the music programs as I had hoped. As such, I quickly became disenchanted with the idea of getting a degree and started focusing on the ever-popular college curriculum of partying, which led to me getting kicked out of UNC. Twice. Before I was 21.

After working various jobs over the next 20 years, I realized that if I was going to make any significant career advancements, getting a bachelor’s degree was essential to making that a reality. In 2015, I graduated with a bachelor’s degree in Project Management at the ripe old age of 41. By acquiring the degree, it opened the door to getting hired by a large defense contractor. Being a glutton for punishment, I went on to get a master’s in Organizational Leadership three years later at 44 years old, and while it was certainly challenging, the pride and fulfillment of achieving that milestone made it all worth it.

The intent of this blog is not to bore you with my life’s mundane details or pat myself on the back, but rather to share my personal experience of following a non-traditional educational path and still being able to find career fulfillment later in life. When I interviewed with Markon in 2019, I was confident that I finally had the educational tools to complement my extensive, real-world experience. Fast forward three short years (thanks pandemic), and I was recommended by the Markon West Director for the Leadership Development Program (LDP) which, to me at least, was affirmation of the hard work that had gone into finally getting a degree despite being well beyond “college-age”.

LDP has supported many of the concepts I learned in my master’s program such as the importance of Servant and Situational Leadership styles, but has also introduced new ideas and concepts that are important to the ever-changing workplace environment in which we find ourselves. The common theme between LDP and the master's program is that leadership is not a one-size-fits-all methodology, as different situations require different skill sets. If a person hopes to be an effective leader, it is important to continue the learning process throughout their career. As an added bonus, there are numerous studies that document the importance of continued learning to help combat cognitive decline later in life.

People sometimes ask, “What advice would you give to a younger you?” and I would tell my high school self to get better grades for college. Perhaps my life path would have been very different had that happened, but without a time machine (Delorean or otherwise), I will never know. What I do know is that taking the “non-traditional” path provided me with tons of real-world experience that I can use in my current role as a facilities project manager. I also know that getting the education unlocked many other doors that would not have been available otherwise.

I encourage all of you to continue the learning process no matter what stage of life you find yourself in. If you have been thinking about finally getting that degree, go do it! Don’t wait for the perfect situation because that doesn’t exist. Life will always throw curveballs, so you’ll just have to make the necessary adjustments to get it done. And learning doesn’t have to be just a degree for career advancement either. Interested in becoming a Master Gardener? Sign up through your local Extension Office. Want to learn how to build a guitar? Look for a place that offers luthier classes. The point is, it’s never too late to learn! 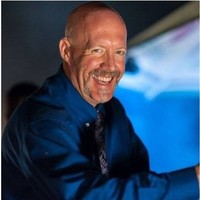 Christopher Laurence joined Markon in 2019 and brings more than 21 years of facility management expertise to our team. He is a Senior Manager with experience supporting Air Force and Intelligence Community missions and timelines. He earned a master's degree in organizational leadership from Colorado State University- Global Campus. He is certified as a Project Management Professional (PMP) and ScrumMaster (CSM). Christopher’s skill set includes plumbing, carpentry, landscaping, low-voltage electrical, equipment operation, and building automation monitoring. He has managed and supervised crews of 5 to 15 people to facilitate the successful completion of customer deliverables and maintenance of mission critical equipment. Outside of work, he is a drummer and percussionist and recently adopted two Boxer-mix dogs from a local rescue.